In the 1990s, our Chairman, Masayasu Sakai, began research and development of biomass gasification when he was the Research Institute Director of Mitsubishi Heavy Industries Ltd.
After resigning from MHI, He later joined the Nagasaki Institute of Applied Science and continued the research of the gasification technology for more than 15 years. His research was supported by the Ministry of Agriculture, Forestry and Fisheries. He was also made a Professor Emeritus of the Institute.
In 2005, the gasification unit “Nourin third unit” was completed.
In 2006, the Biomass Energy Corporation (BME) was established.
As a result of more than a decade of continued research and development, the biomass gasification system “BME series” that developed the “Nourin third unit” started operation in Singapore in 2016.

Innovative structure, “wood Biomass boiler” that goes beyond the boundaries of conventional science. 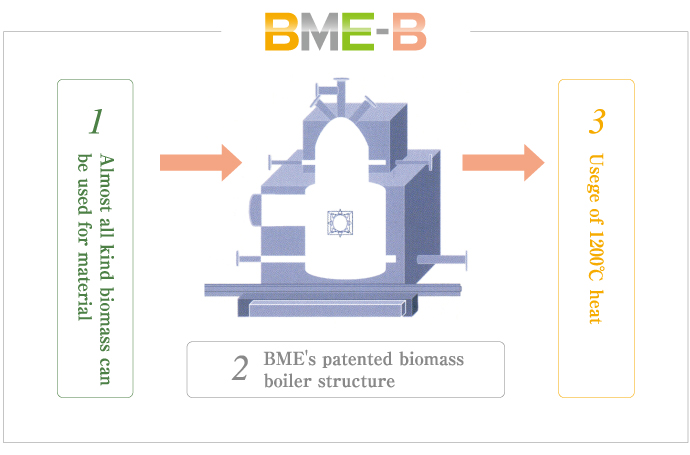 1.Almost all kind biomass can be used for material

BME’s technology enables all kinds of wood biomass to be used as raw material, which is not possible in conventional biomass boilers.
Our efficient biomass boilers can utilize all parts of trees such as branches, leaves and bark as raw materials, regardless of the type of trees such as conifers and hardwoods. Agricultural waste such as rice husks and even the fibre of sugarcane can be used for gasification as well.

BME’s patented biomass boilers can realize high temperature combustion of more than 1,200 degrees Celsius by only using biomass. It is a versatile system that can be customized to the customer’s needs. Apart from power generation, the energy output can be calibrated for a variety of uses, such as heating up air, high temperature steam, boiling or warming up water through BME’s patented system of heat exchangers.